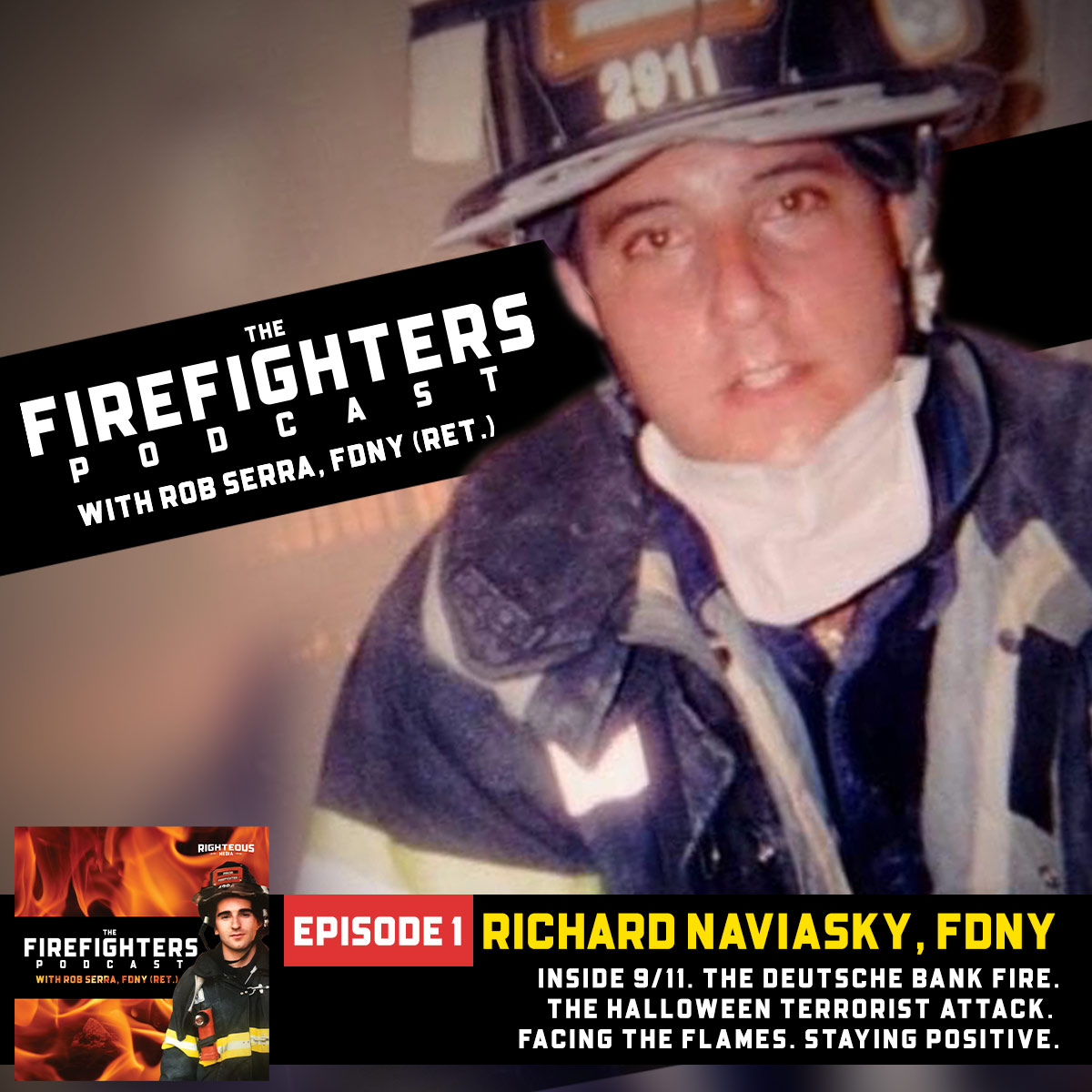 Welcome to the first ever episode of the Firefighters Podcast with Rob Serra, FDNY (Ret.). It’s the hottest podcast in America, literally. And this episode hits the ground running and doesn’t look back.

Episode 1 features 9/11 hero firefighter Richard Naviasky. Over a 20 year career at the FDNY, he saw some shit. The kind of shit that sticks with you. From the chaotic morning of 9/11, to the deadly 2007 Deutsche Bank fire that killed two firefighters and injured more than 100, to the horrific 2017 Halloween terrorist truck attack that killed 8 people and slammed into a school bus, Rich has been on the scene at some of the most harrowing fire calls of the last two decades. He’ll take you inside the hardest days, he’ll share heartbreakingly graphic detail, and show you the magnitude of the decisions required of these incredible men and women. He will also leave you inspired by his fortitude, his heart and his example of selfless service.

Rich also speaks bravely out about the health effects he suffered as a result of exposures while on the job. And while he’s honest about the problems he’s faced, he’s not letting it hold him back. And his attitude is an inspiring look at how you handle adversity. It’s a conversation you’ll never forget–and a powerful start to the podcast that’s about much more than firefighting. It’s about courage, leadership, overcoming adversity, love and survival.

Host Rob Serra (@SerraRob) is America’s leading advocate for firefighters and first-responders. A renowned activist, technical expert and father of three, Rob was born and raised in Staten Island, NY. He began his firefighting career with the FDNY in July 2001 just six weeks after graduating from college. And his first day in the field was September 11th. While he was not scheduled to work that Tuesday, he, along with thousands of others, reported to the World Trade Center to help with the aftermath of the attacks.

And as we near the 20th anniversary of 9/11 it’s a time for reflection, a time for remembering. Never forget isn’t just a hashtag. And if you’re one of America’s Firefighters, a first responder, or the family or a friend of one… this is your new home.

And that home has a little special sauce this episode. Rob’s mother-in-law makes Nanny’s Tomato Basil Pasta. It’s a delicious dish that will feed your family… or a hungry firehouse and leave everyone happy.

Are you a firefighter that has a great story to share? Send it to us at info@righteous.us and be sure to visit thefirefighters.us for videos, Firefighters merch and more great content.

You can also watch video of this show with Richard Naviasky on the Righteous YouTube page. The Firefighters Podcast with Rob Serra connects, informs and inspires–and is powered by Righteous Media. On social media or www.thefirefighters.us

Join the Squad! Become a member today and get access to exclusive content, merch discounts and more. Learn more at: www.patreon.com/thefirefighterspodcast

A special thank you to our sponsors, Rocky Boots. We’ve got a great deal exclusively for our listeners. Use the coupon code FIRE25, and get 25% off at rockyboots.com. It’s a great company and a great deal.

You can also watch video of this full conversation: